Both parties say they’d like to vote on proposals like that before the end of the two-year session in November. 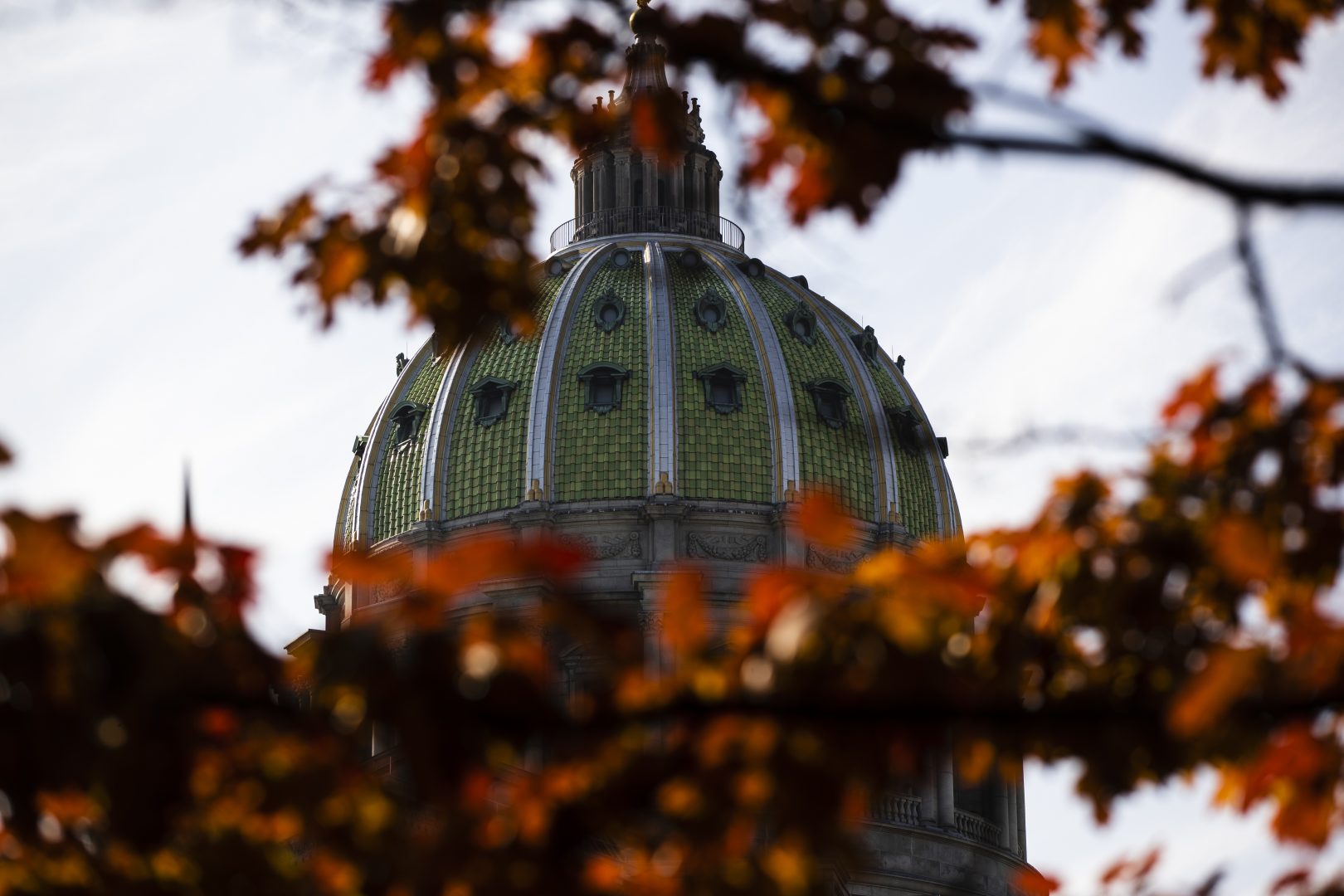 FILE PHOTO: In this file photo from Nov. 19, 2019, the dome of the Pennsylvania Capitol is visible through the fall trees in Harrisburg, Pa.

State lawmakers have only a few weeks worth of business days planned between now and the end of session on November 30th. But that’s not stopping either chamber from considering a few bills before then.

A key House committee said Friday that it’ll be voting next week on new guidelines for ballot transportation after an election. Under the proposal, counties would have to place all ballots in a sealed container and include a manifest of the contents. They’d also have to log any instances when seals are broken.

In some instances, Pennsylvania election law already requires workers to keep ballots in “secure, safe and sealed” containers prior to counting, but the proposal would give county boards more detailed instructions.

The House State Government committee will also be considering monthly purges of dead people from voter rolls. Right now, that happens every May – part of Pennsylvania’s participation in an interstate voter database system called ERIC.

Republicans have argued purging the rolls more frequently would lower the chance of a dead person’s name being used to vote illegally. That only happened once during the 2020 election: a Delaware County man pleaded guilty last year to using his dead mother’s name to cast a ballot for former President Donald Trump.

Over the last few years, places like southwestern Pennsylvania have become hubs for the growing technology: venture capital money aimed at developing cars that can drive themselves has poured into cities like Pittsburgh. But companies developing those vehicles say a state law that requires a human driver behind the wheel is holding them back.

Lawmakers like Sen. Wayne Langerholc (R-Bedford) have said they want to change that. Langerholc is sponsoring a bill that gives research companies special permission to test autonomous cars without a driver, so long as they have at least $1 million in insurance coverage.

The Republican senator said during a January committee meeting that his proposal “paints a picture” in which Pennsylvania becomes a leader in driverless tech.

“This picture is going to bring many, many jobs, and significant economic activity to this Commonwealth, and we will not be left behind in our endeavors,” Langerholc said.

The Senate is also considering another autonomous car bill sponsored by Rep. Donna Oberlander (R-Armstrong) – which already received bipartisan support in the House.

Among other things, House and Senate Democrats say they’re working with Republicans on making a state home repair grant program permanent as early as this fall.

Lawmakers set aside $125 million of pandemic relief money for so-called Whole Home Repairs in the latest state budget, but that program will run out of money by 2026.

“It’ll help a lot of families, in particular our seniors, stay in their homes because repairs will be made,” Senate Minority Leader Jay Costa said. “We want to make sure that we have a state program with state resources to be able to continue to build that program.”

Homeowners and landlords haven’t been able to apply for home repair grants yet. The Department of Community and Economic Development says it will be publishing guidelines by the end of this year and will open the program next year.

As part of WITF’s commitment to standing with facts, and because the Jan. 6 attack on the U.S. Capitol was an attempt to overthrow representative democracy in America, we are marking elected officials’ connections to the insurrection. Read more about this commitment.

Rep. Oberlander (R-Armstrong) is among the several dozen lawmakers who signed a letter asking Congress to object to Pennsylvania’s 2020 electoral college vote — despite no evidence that would call those results into question.

This supported the election-fraud lie, which led to the Jan. 6, 2021 attack on the Capitol.